This week we were approached with another game to play through and review; and I must confess that I am liking that trend. Though before I get to feeling too self important, let me jump on the spikes up front and say this week it's a rage platformer. That's right! Bit.Saw is of the devilish sort that brings out the worst and most hilarious reactions in a gamer. Brought to us by Shubshub, and available in itch.io for a humble $1 USD; it isn't too complex but many of the good ones never are. With such a modest price tag and 24 computer smashing levels, it's pretty hard to overlook. 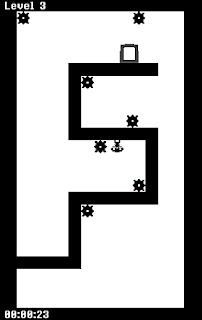 Personally, I have an odd relationship with rage platformers and their ilk Having played a good many of the titles in this sub genre of one of the oldest gaming styles out there, I'm not sure of what exactly I get out of them; besides fury so pure and burning hot that I can loosely be described as a solar entity, and paroxysms of indescribable joy when I finally complete a level. I believe it is this very mystery wherein lies the subtle elegance of the rage platformers; which seem so simple on screen, but add up to more in spite of their nature. Bit.Saw slides right in there with Super Meat Boy and VVVVVV; with a much more apparent inspiration from the later, owing to the simple visual style and the ability to flip gravity along a single axis. 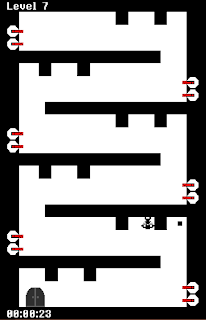 The visuals of the game are not explosive. In fact, I believe the entire thing could have been played on a Gameboy Color; though as we have discussed with games like this visuals aren't the point. As is the case in many things, less can be more. In this game I think the basic look of it serves to accentuate some smooth platforming and gives clear indicators of where is safe, and where is not.

When speaking of things like "safety" in games like this, I feel it is important to note that it is a relative term. Each hazard is innocuous all on its own, but each level is of course, designed with your insanity in mind. As we have mentioned above, that is simply part of the charm of games like this and Bit.Saw is certainly no let down in that department; but I fear I am starting to just ramble. 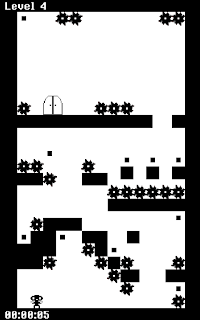 To put a bow on this one, I'm giving this one the recommendation for one simple reason. It was fun! Fun for an incredibly low investment I might add. So go ahead and treat yourself to this one, if you think you can handle it.